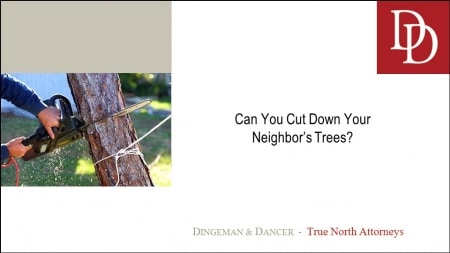 Can You Cut Down Your Neighbor’s Trees?

We often get questions from clients who either want to cut down trees that are on the border of their property line with their neighbor or who at least want to remove several branches that are encroaching on their property from a tree on their neighbor’s property. So, you might ask, what’s the answer? This article is intended to provide a brief overview of the various questions relating to property rights in vegetation which grows on the common boundary, as a result either of spontaneous growth or planting by one or the other adjoining landowner.

Trees, bushes, and other forms of vegetation can commonly serve as informal indicators of boundaries between residential properties.[1] Unfortunately, these natural boundary markers are also common sources of dispute, especially among residential property owners.

A tree standing on the boundary line between lands owned by different persons is considered to be property owned in common by the adjoining landowners.[2] In other words, both parties own the tree. In this scenario, neither party has the right to cut, injure, or destroy it without the consent of the other.[3] Although Michigan has not considered the issue of shrubbery or hedges located on a boundary line between two properties, it seems logical that the same rule would extend to this form of vegetation as well.[4]

This same hands-off approach does not apply, however, where a tree stands on the land of one adjoining landowner and the branches extend over the dividing line and above the land of the adjoining owner. Here, the tree that stands near a boundary line is owned by the landowner of the realty on which the tree grows.[5] And in this scenario, if the branches of the tree extend across the boundary line, the owner of the adjoining parcel has a right to cut back the branches to prevent them from extending onto or over his or her property.[6] This rule applies with or without the consent of the landowner who owns the tree.

When exercising this right, an adjoining landowner may sever intruding branches or roots at, but not beyond, the boundary line between the adjoining parcels of land. Although Michigan has not considered the question, a good argument can be made for limiting this rule to prevent an adjoining owner from injuring a tree so that it is no longer useful for the purpose for which it was planted.

Although the rules set forth above are fairly straightforward, you should consult legal counsel before making the decision to take an axe to your neighbor’s trees. Often times, such issues can be resolved by an attorney preparing a letter on your behalf. Feel free to contact our office if you have any questions or needs.