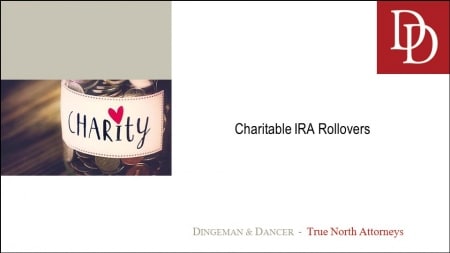 What are two things that most retirement-aged individuals value? Charitable donations and tax breaks! Well, maybe not everyone shares the same enthusiasm for philanthropy and avoidance of the Internal Revenue Code, but for those of you who are interested in these exciting topics, it’s time to party.

Most people who have spent a lifetime preparing for the end—the end of membership in the workforce, that is—are well aware of the fact that many retirement assets, such as IRAs, are funded with pre-tax dollars. That means Uncle Sam has agreed to wait until you are in your golden years before taking his slice of the pie. Theoretically, this allows an investor to earn interest on the taxable portion of income over the course of his or her lifetime, and then settle accounts at a lower tax rate after leaving the workforce.

Unless the particular investment account is of the “Roth” variety, the investor must begin taking certain minimum distributions upon reaching the age of 70½ (and here you thought half-years stopped having meaning when you turned 6). This is when the government finally comes calling and requires the investor to pay tax on the mandatory withdrawals. For those of you with IRAs that would rather not pay these taxes and would prefer to make a charitable donation instead, listen up. By using what is called a “charitable IRA rollover,” a donation of up to $100,000 can count towards the minimum required distribution that a retirement account owner would otherwise be required to take.

Aside from the warm, fuzzy feeling you are certain to feel, donating IRA assets to a charity through such a vehicle results in important tax advantages for everyone involved. First, unlike you and me, charities are not required to pay income tax on their withdrawals from these accounts—they receive every dollar withdrawn from the IRA. Second, the amount donated to a charity is not included in the donor’s adjusted gross income (AGI). With a lower AGI, not only is the donor able take advantage of greater benefits under government programs such as Medicare, but he or she will also reap the reward of a lower tax rate!

If you have any questions or would like to learn more about charitable IRA rollovers or other forms of charitable giving and the associated tax implications, the experienced attorneys at Dingeman & Dancer, PLC would be happy to lend a hand. Go Blue!