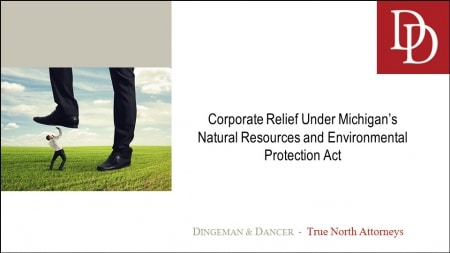 Such projects are not always as clean and tidy as they appear from the outside. In fact, property ownership rights (and encroachment of those rights) are often at stake. Even a cursory review of the front page of the local newspaper illustrates the heated contention involved in land development; these issues are of even greater concern in regions replete with natural beauty.

Land disputes often involve more than the garden-variety complaints of trespass and nuisance. Development, by its very nature, involves earth and soil displacement—which may find its way onto the property of another. What are land owners’ rights when the health and safety of their land is affected by the construction projects of another? Are remedies limited to the landowner personally, or may a business or corporation bring an action against the offending party?

“Health and Safety” of a Corporation

These questions were recently addressed by the Michigan Appellate Court in Tennine Corp. v. Boardwalk Commercial, LLC, unpublished opinion per curium of the Court of Appeals, issued March 31, 2016 (Docket No. 323257). In Tennine, a corporation (Tennine) sued a railroad company (CMR) that was in the process of transforming an abandoned railroad right-of-way into an area fit for recreational use. According to Tennine, soil that clung to the backhoes during demolition tracked onto its property. Tennine alleged that the soil was contaminated with hazardous chemicals.

Tennine sought relief against the railroad company under, among other things, Michigan’s Natural Resources and Environmental Protection Act (NREPA). CMR moved for summary disposition (to dismiss the case), arguing that Tennine was not a person “whose health or enjoyment of the environment” was adversely affected by the contaminated soil. The trial court agreed, holding that Tennine was not a person and therefore lacked standing to sue under NREPA.  Tennine appealed the trial court ruling.

It’s All About the Pleading

On appeal, the Michigan Court of Appeals found that Tennine was a “person” under NREPA, as the statute defines “person” as “an individual, partnership, corporation, association, governmental entity, or other legal entity”—and therefore Tennine had standing to sue. The larger issue for the Court, however, was whether Tennine properly alleged that its health or enjoyment of the property was affected (and therefore able to recover under NREPA).

CMR cited several cases to support its argument that Tennine could not recover; each cited case involved a plaintiff corporation that was denied relief under NREPA. The Court dissected and discussed the referenced cases and ultimately came to the conclusion that the cases were dismissed because the plaintiffs in those cases sought monetary costs and damages associated with contractual breaches, and not injunctive relief for environmental contamination contemplated under NREPA. Those plaintiffs did not provide any allegations or information to indicate that their health or enjoyment of the properties at issue were jeopardized.

The Court then turned to Tennine’s complaint. Tennine specifically alleged that CMR’s removal activity released or threatened to released hazardous substances that would: (1) endanger the health of the people on its property; and (2) reduce the value of its property. Tennine also advised CMR (in a notice to sue) that the removal activity was adversely affecting Tennine’s “enjoyment” of the environment. The Court held, consequently, that Tennine had properly alleged a basis for relief under NREPA.

Next, the Court went on to consider whether Tennine, as a corporation, could suffer from the “loss of the enjoyment of the environment” as a result of the chemical release. The Court—after parsing the definitions of such terms as “environment” and “enjoyment”—held that a corporation (like a person) may exercise the right to use its land or water, or otherwise “enjoy” its real property. Thus, a corporation suing under NREPA need not present any evidence that the health of employees or other human beings is compromised, but must plead that its enjoyment of the property (i.e., value) is affected.

Whether corporations are persons has been a hot topic of debate since the U.S. Supreme Court’s 2010 holding in Citizens United v. FEC and even more recently (and controversially) in the 2014 ruling in Sebelius v. Hobby Lobby, Inc. The trend (as evidenced from these holdings) is that corporations share several, if not all, the same rights as people under the law. The holding in Tennine echoes this sentiment—and provides an avenue for small businesses and other corporate entities to seek injunctive relief for potential health and safety hazards resulting from property development. Business owners should therefore be aware that potential damage to their corporate health is protected by NREPA and other laws.