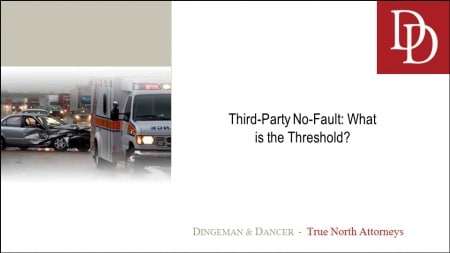 Third-Party No-Fault: What is the Threshold?

Summer is the time of year that most of us Michiganders eagerly anticipate. As the snow begins to melt and the temperatures begin to rise, we all worry less about winter road conditions and start to drive a little faster. Although warmer weather eliminates the dangers that snow and ice present, it also comes with busier roads as Traverse City’s population rapidly increases. The risk of a pedestrian running in front of your car or a careless driver colliding with you increases as tourists flood our roads. So, in the unfortunate event that you are injured in an automobile accident this summer, it is important to understand what rights you have as a driver.

Most car accidents consist of two claims. First, Michigan’s No-Fault Act requires no-fault insurers to provide personal-protection-insurance (or PIP) benefits regardless of fault.[1] This is what is called a first-party no-fault claim, and it enables you to receive certain expenses. These expenses include accident-related medical expenses, payment for roundtrip mileage for accident-related appointments and prescription pick-ups, wage loss, household replacement services, and attendant care. For a more in depth discussion of PIP benefits available in a first-part claim, see our previous blog post.

In addition to PIP benefits from the no-fault insurer, you may also have a cause of action against the driver that hit you; this is called third-party no-fault and is rooted in principles of general negligence. Whether you can recover in a claim for third-party no-fault largely depends on the injuries you sustain in an automobile accident. Specifically, Michigan law dictates that an injured person must suffer a “threshold injury” in order to recover on a third-party claim. “Threshold injury” has become a term of art and is often the root of contention in Michigan No-Fault cases.

Michigan’s Supreme Court has shed light on this phrase by creating a three-prong test to determine whether an individual has actually suffered a serious impairment of body function.[4]

Car accidents are unpredictable, but there tends to be an increase as the peak of summer approaches. While this article sheds only a glimpse of light on Michigan’s multifaceted No-Fault Act, it is important to understand your rights if you are in a car accident and whether you have a claim against the person who caused you harm.

If you or someone you know has been injured in a car accident and would like more information regarding rights to recovery, please contact the experienced personal injury attorneys at Dingeman & Dancer.